Pucks clanging off the plexiglass or ringing off the iron posts of the net. The referee’s whistle blast. The crunch of skates slicing through the ice. The boom of bodies crashing into the boards. This is familiar music in Canada, Russia, Scandinavia, and the northern US states. But Bangkok? Well, if you’re wandering around the 7th floor of Central Plaza Grand Rama 9, you’re likely to hear these sounds, because Bangkok ice hockey is a real thing. Many of Bangkok’s shopping malls have an ice rink, where you can rent a pair of skates and go for a leisurely or (depending on your skill-level) clumsy glide around the ice. The Rink at Central Rama 9, however, often plays host to actual ice hockey games, ranging from international tournaments, to league games, to pick-up hockey.

Thailand has both men’s and women’s national teams. The women’s team is improving quickly, and the men’s team has earned a lot of recent success. The men’s team is ranked 52nd in the world – an outstanding achievement for a tropical nation. While they’ve had some lopsided losses in the past, including an embarrassing 52-1 loss to Kazakhstan in 2007, they’ve been on fire recently. They trounced the competition to a convincing gold medal win at the SEA games in the Philippines in December of 2019. While they aren’t likely to face off against hockey powerhouses like Canada, Russia, or Sweden anytime soon, the future of Thailand’s national team is bright indeed, and you can see them practicing or playing in tournament games at The Rink. 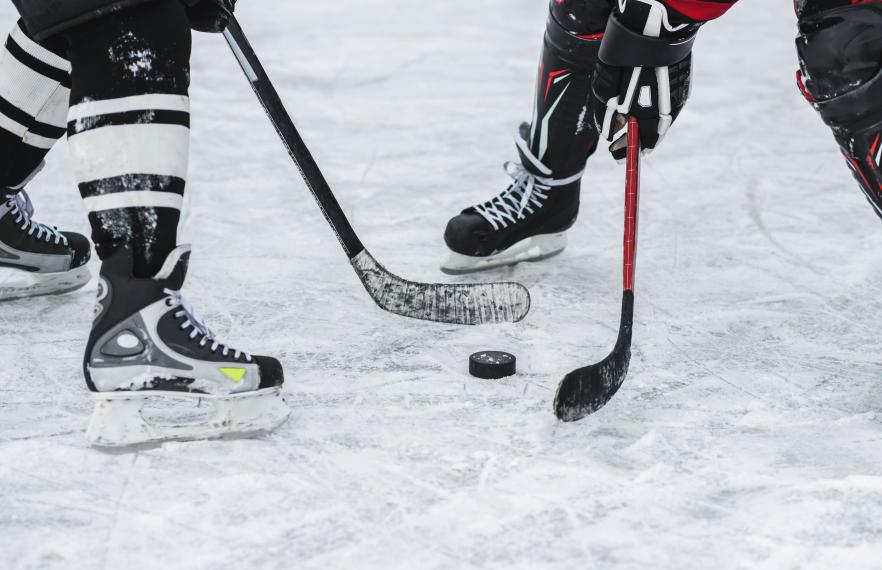 Bangkok hosts two major ice hockey tournaments – the Land of Smiles in October, and the City of Angels in March. Teams come from around the world – China, Singapore, Russia, Finland, Canada, and more – to play in these tournaments.

During the 2012 NHL lockout, most of the world’s best players joined leagues in Europe or Russia. But Chicago Blackhawks defenceman Johnny Oduya actually decided to come play in Bangkok. He led the hometown Bangkok Flying Farangs to the Land of Smiles Elite Tier championship that year, before returning to the NHL and winning the Stanley Cup in 2013. (He won it again with the Blackhawks in 2015.)

While you won’t likely see any current NHLers in these tournaments, the speed and skill of play in the top tiers is still very impressive.

The Bangkok Ice Hockey League has 12 teams. The skill level is quite varied, but all the best expat players and Thai national team stars play on various teams. Last year the stacked Bangkok Warriors – mostly comprised of Thai national team members – breezed to an easy title win. While this league often has lopsided scores, as some teams are much more skilled than others, the stands are usually packed with fans and the atmosphere is electric.

The Siam Hockey League only has four teams, so it’s much more competitive. It also features all the best expat players and many Thai national team members. The now-retired Johnny Oduya has also been known to play in a few games each year. In the past, the more experienced and usually larger expats dominated the play. Recently though, the younger, faster, and increasingly savvy Thai players have been skating circles around the sometimes-sluggish expats.

Almost every week (usually on Thursdays), the Flying Farangs host a pick-up game, affectionately known by the Canadian moniker of “shinny”. In this friendly game, there are no referees, and no one keeps score. Players of all skill levels are welcome to join. The organiser, Scott Murray – widely known in Bangkok’s hockey community as “the Godfather” – sets up the lines so that everyone plays with and against players in their general skill range. The first line is usually made up of highly-skilled payers, the second with intermediates, and the third with beginners.

They also have a ton of spare gear lying around, including skates, so if you’re looking to lace them up and play, contact the Godfather. He’ll be happy to set you up with a motley assortment of gear and you’ll be one of the lucky few who can say, “I’ve actually played hockey in Bangkok.”

So, if you’re a player, a homesick hockey fan, or just a curious person looking to see a spectacle, come on over to The Rink and catch a live Bangkok ice hockey game.